Yesterday I posted about an alleged new Asus iPad Mini clone that will be powered by the Snapdragon 650 CPU. This chip is being used in the just-released Xiaomi Redmi Note 3. It’s been established the 650 gets an AnTuTu 6.x score in the 77,000-range.

Given the inflation in scores AnTuTu 6.x brings, I was skeptical about its true power.

Well, it turns out to set a new low for budget devices.

Just look at how it kicks the ass of even the Snapdragon 808!

… for a device with 2GBs of RAM and 16GBs of internal storage, the same as the new Asus tablet.

Would Asus be able to price it at just US$199? They were able to do that with the “Basic” version of the ZenPad S 8.0, so why not this one too?

If so, it’d be a kind of shockwave in the tablet market. It’d have nearly twice the computing power of the US$149 Rockchip 3288-based Insignia Flex Elite.

And here’s a shocker too: It could be more powerful than the US$399 Exynos-based Samsung Galaxy Tab S2 8.0!

Here’s a screensnap from a YouTube video I managed to find that shows the AnTuTu 6.x score of a Samsung Galaxy Tab S2 8.0: 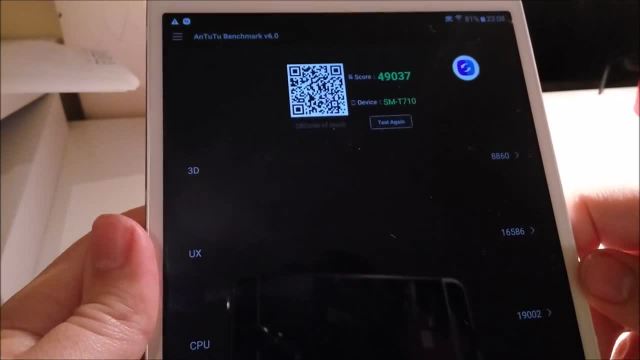 The AnTuTu 6.x test result is around the six-minute mark:

Samsung should have future-proofed those S2 tablets by including the latest version of the Exynos, not the last-generation one. Now they’ll get scragged by upstart Asus!

If these AnTuTu scores hold up across devices from a variety of phone manufacturers, then 2016 will represent a new age for low-cost devices, with power that far surpasses anything that came before them.

And anyone who has been thinking of buying a tablet should wait until this new Asus tablet is released. It could upset the entire market.

This entry was posted in Android, iPad Format Clones. Bookmark the permalink.