A dump of things I’ve read and am thinking about.

I absolutely cannot stop thinking about VR since my encounters. Sometimes I walk around with “VR Eyes,” seeing the world as if it was a VR simulation.

E3 2015: The Oculus Rift CV is Amazing, but the Resolution Could be a Problem – Hands-On Preview

One thing that can’t be altered though is the resolution. Screen resolution is probably the biggest concern for VR aficionados, and while the Oculus Rift is delivering one of the highest res screens, it still won’t be enough for some people. Pixelation and the “screen door effect”, where you can see the individual black lines separating the pixels on the screen, are still present, though they have been significantly diminished from past iterations.

Some items in the game showed the lower resolution problem more readily than others. A torch, for example, looked more like a block than an actual flame. The experience was a definite step down from the 1440p or even 1080p screens that PC gamers have grown accustomed to over the last few years.

This isn’t a problem for just the Oculus Rift though, as the HTC Vive will feature the same 2160×1200 resolution, while Sony’s Project Morpheus will be much lower. The concern is really that this resolution simply isn’t high enough for VR, since the technology demands the viewer to be so close, and the image to be split between both eyes.

StarVR headset is an HMD that is capable of a 5,120 x 1,440 pixel resolution and an even more ridiculous 210-degree viewing angle.

Each headset is said to feature twin 5.5″ QHD displays, which help deliver not only the high resolution but the viewing angle as well. This should offer a display big enough to cover a user’s peripheral vision and even full eye movement. We’re also told it will operate at a 90Hz refresh rate, which is great for those that are worried about nausea.

What it won’t be great for is people’s PCs. High frame rates are mandatory for VR to avoid motion sickness and Oculus’ recommended specs for its much more pedestrian CV1 (2,160 x 1,200 resolution, 90Hz) is said to require at least a current gen. i5 CPU and a GTX 970/AMD 290 or better.

Even if Starbreeze releases this headset to consumers in a timely fashion, it will be very, very difficult to run games at comfortable frame rates at that resolution. Doing so will likely be very expensive in comparison to its competitors’ products as well, and mass-market appeal is therefore going to be difficult to obtain.

I was going to say that specialized PCs that are exclusively for VR should be made. But then I realized that’s what a game console is.

Oculus Rift Resolution – Why Are People so Obsessed With it

Oculus Rift resolution has been improved by a margin over the previous kit, yet individual pixels are still visible. Now that “Powering The Rift” plog post has been released, we know that Oculus Rift CV1 will feature 1080×1200 pixels for each eye with 90Hz dual split screens. DK2 has 960×1080. Doesn’t seem like a huge improvement, right? Right, because it isn’t. Still, you will get around 20% more pixels stuffed into CV1.

We do have to remember that for getting a crisp and solid image, we have to take into account fill factors. Fill factor is the distance between each pixel. 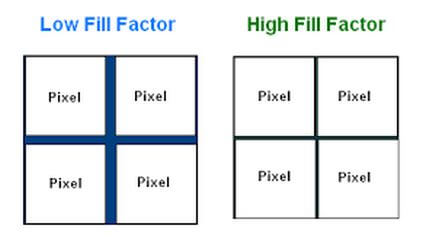 If by any chance CV1 has a higher fill factor, it will drastically reduce the screen door effect, and would also increase the brightness since less light would be emitted sideways away from the lens.

The Rift uses an OLED panel for each eye, each having a resolution of 1080×1200. These panels have a refresh rate of 90 Hz and globally refresh, rather than scanning out in lines. They also use low persistence, meaning that they only display an image for 2 milliseconds of each frame. This combination of the high refresh rate, global refresh and low persistence means that the user experiences none of the motion blurring or judder that is experienced on a regular monitor.

Oculus Rift: Things to know before you order

After the aforementioned sensors working together, there is also a 5.7 inch Full HD AMOLED capacitive touchscreen, which is basically a very nice smartphone screen, the ones used in the latest Samsung Galaxy phones. In fact, Oculus’ other VR system, the GearVR works exclusively with Samsung Galaxy smartphones. It’s a little mind-blowing to think about how the screens making virtual reality possible are smaller than six inches!

Same-day update: The above link has incorrect information:

I’ve been arguing — armed with only ignorance on my part, of course — with @stroughtonsmith — who actually has an Oculus Rift DK2 — about this. He says that phone-based VR is not the best. I argue that it’s Good Enough to triumph.

I feel like being back in the early days …

… when Suits were laughing at microcomputers.

But there’s a huge difference. Smartphones are kick-ass and not primitive. And they can only get even more kick-ass.

And there’s this too: He’s probably arguing from the standpoint of zoom-zoom gaming. Not all VR will be that. There’s a place for fixed-point-of-view VR (where the viewer is standing in one spot). The Cirque du Soleil Samsung Gear VR Kurios is a prime example of that: ‘Inside the Box of Kurios’ Is Your Ticket to a World-class VR Performance. (I must note that the demo of this VR I saw ran only a few minutes and was not the complete experience described in that article. But it was still impressive as hell!)

Unless a screen refresh rate itself causes motion sickness — and it may well be the case, I don’t yet know — I don’t see why such VR couldn’t succeed via phones without the hardware requirements of an Oculus headset. Just as the earlier creators of microcomputers used economical design and ingenuity to realize their dream of a computer everyone could own, creative people can do the same to make phone-based VR succeed.

@PalmerLuckey Some content does okay at LP60hz (narrower FOV with dark edges like VR Cinema), but high refresh rate is a massive win.

Which, in its second part, seems to validate my above argument for phone-based VR if you’re clever in how it’s done.

And, you know, people can also adapt.

I think back to my first experience with a Wang word processor. It had a green screen.

That was a very unnatural thing to stare at. I got nauseous the first time I used it. Then I adapted. As did millions of others who were employed using one.

And going back to the first motion pictures, people would panic when seeing something like this in a theater for the first time:

Scene 14: A life-size closeup picture of the leader of the outlaw band:

The film closes with a medium shot close-up of the bandit chief (with green-tinted shirt and red-tinted kerchief in some versions) (George Barnes) with his hat pushed back on his head. He points and shoots his revolver point-blank, directly into the camera (and, of course, at the audience). This caused a tremendously terrifying sensation at the time. This final punch to the film was totally irrelevant to the plot. Theater managers were free to either begin or end the picture with this scene — a promotional gimmick — selecting it as either a prologue or epilogue.

And now, let’s see inside an earlier version of the Oculus Rift:

Surprise! It was a screen from a Samsung Galaxy Note 3:

Returning to phones and how I think they’ll lead the way in the popularization of VR, Sony already has a phone with a 4K screen, the Xperia Z5 Premium.

I think Sony has a corresponding VR headset yet to come. Why else go to such an extreme screen? It makes sense only for VR.

Finally, I think all VR should be shot for 3D. That Cirque du Soleil Kurios was incredible. Everything needs 3D like that. Flat immersive versus 3D will probably be the next battleground after phone versus dedicated headset.