After reading several reviews of the two new Chromebooks from Samsung — the Plus and the Pro — I wanted to get my hands on the Plus ASAP. A tech sojourn this past weekend found me in luck:

How I encountered it at Best Buy.

I was really looking forward to this. The original 10-inch Asus Chromebook Flip impressed me but the low-res screen was terrible in tablet mode. It made PDFs unreadable because of too few pixels. It had a screen at 1280 x 800.

The Samsung Chromebook Plus has a 12.3″ screen at 2400 x 1600. I wanted to see how that would be in tablet mode with a Google Books PDF. An additional point of interest was its 2:3 aspect ratio.

Not all Best Buy stores are smart about the way they use the anti-theft attachment:

This Best Buy wasn’t set up to properly showcase the device and that’s as far as I could get into tablet mode with it.

One note about these photos and the video to come: The screen refresh interferes with the camera sensor I was using and bands appears in images. These bands can’t be seen in person. The photos and video were taken with the borrowed Asus MeMo Pad 7. This post was created via my regular notebook, not on the tablet. 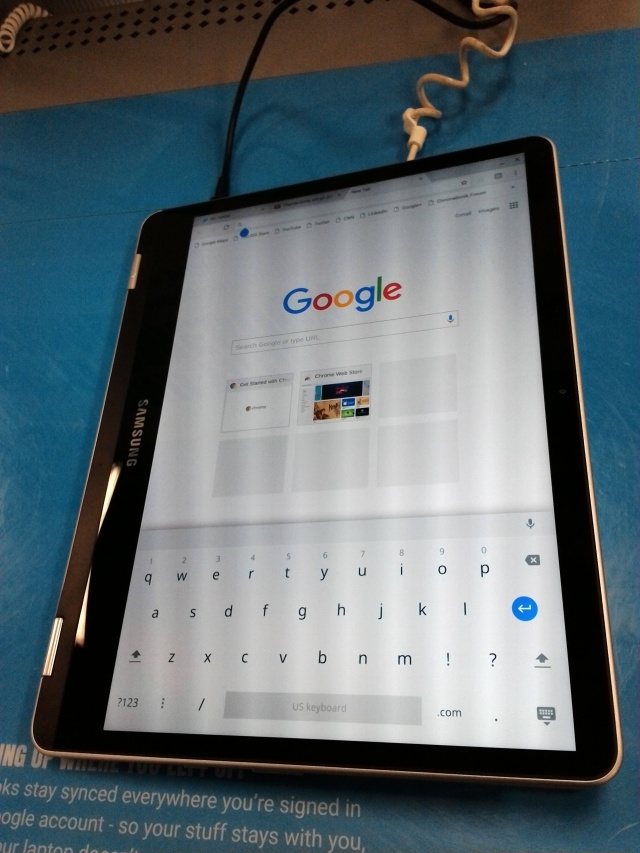 As for the keyboard itself: 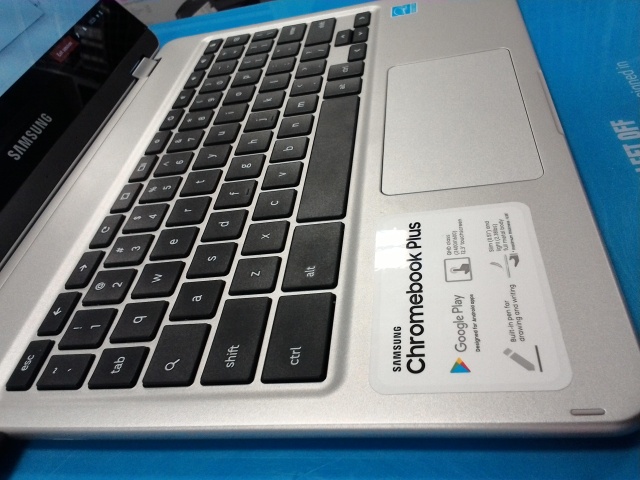 It has good travel for my taste. The feel of it is a bit light and exceedingly plasticky, however. But I preferred it to the Asus and it’s perhaps the best Chromebook keyboard I’ve yet encountered. I could really type on it without hitting the wrongs keys (making my fingers type the correct words was another matter that day, as my typo-ridden contemporaneous tweets reveal; I was excited!).

A close-up of two keys and a spec sticker: 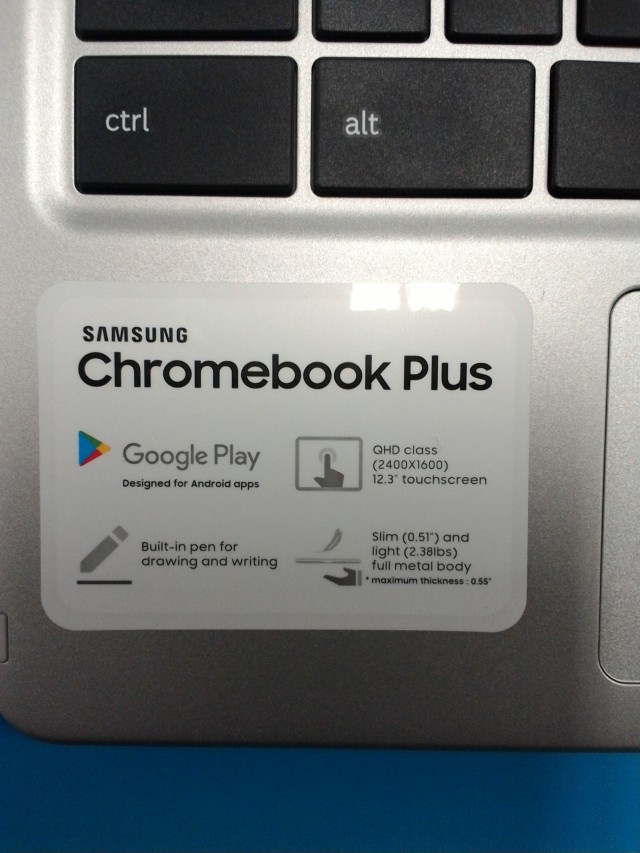 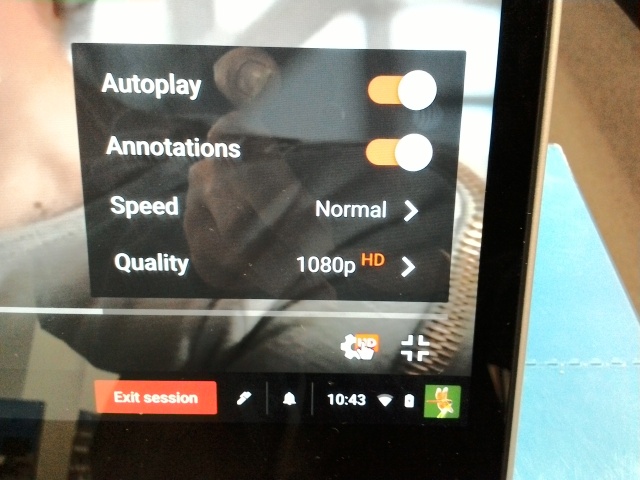 1080p played just fine — something my own damned notebook can’t reliably do! I didn’t think to try something with higher resolution.

As for the speakers, they’re underneath and are small:

At full blast, I could hear the audio just fine in the store. But that depended on the YouTube video’s audio strength itself. I wouldn’t call the sound rich. For the price Samsung is asking, they’re rather disappointing. It’s also too bad Samsung couldn’t get those speakers on top. I didn’t get a chance to try the headphone jack.

A size comparison with a nearby all-plastic Acer Chromebook that’s about half the price: 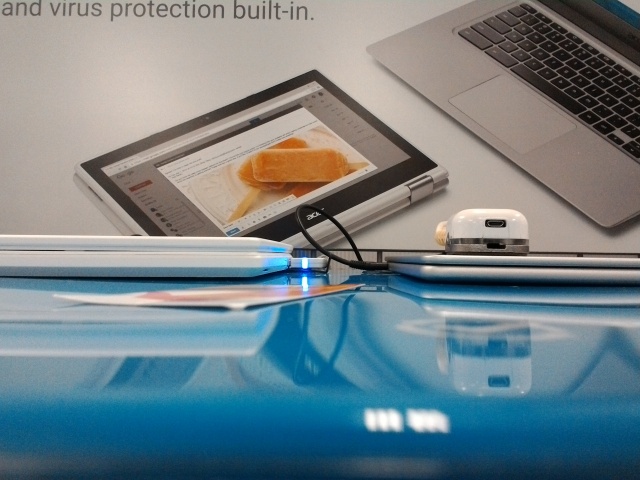 It’s much thinner, as well as lighter.

It’s slightly larger due to the 2:3 screen aspect ratio. 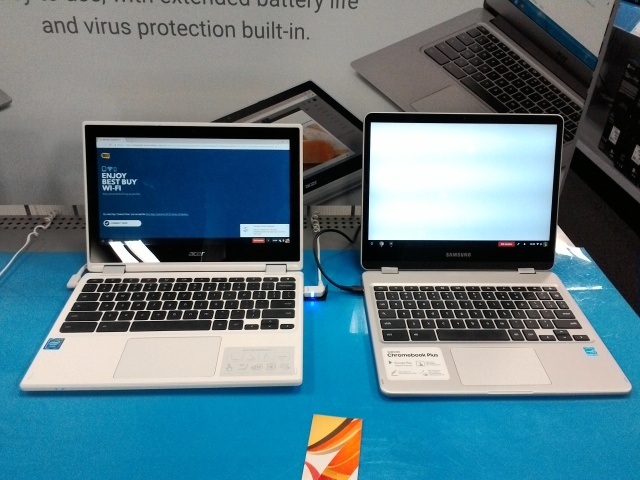 But that larger screen just makes it irresistible.

I didn’t get to try it because I really didn’t know what I would use it for. I understand a pop-up menu appears when the pen is removed from its well, but this pen was already outside of it and couldn’t be inserted because of the anti-theft clamp.

And now for the entire point of this venture: A Google Books PDF! It was The American Magazine volume 93. 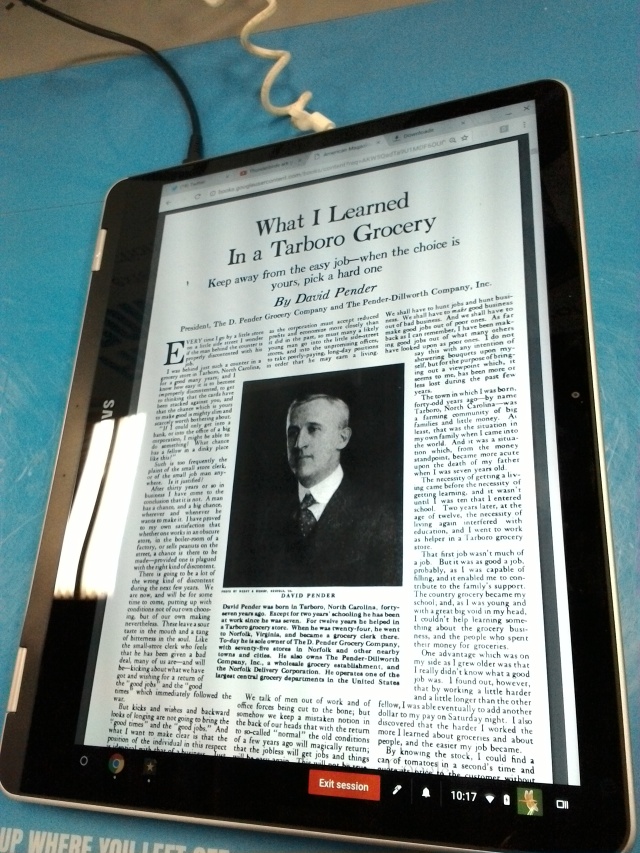 It was being displayed in the Chrome browser. And it was janky as hell. I found out the reason why later, when I was trying a second demo unit at another Best Buy. Demo models have a demo program running all the time in the background. This was stealing a great deal of processing power, all of which is needed when dealing with a large Google Books PDF. Once I figured this out and killed the demo program, things were smooth. However, the video that will appear later has the jankiness due to the background demo program running.

But there was no way in hell I’d want to read a Google Books PDF in the Chrome — or any other — browser. What interested me is this Chromebook’s ability to run Android apps. And for Google Books PDFs, there’s just one app up for that job: SmartQ Reader.

So I downloaded the PDF:

And then went off to find the Google Play Store icon so I could get SmartQ Reader: 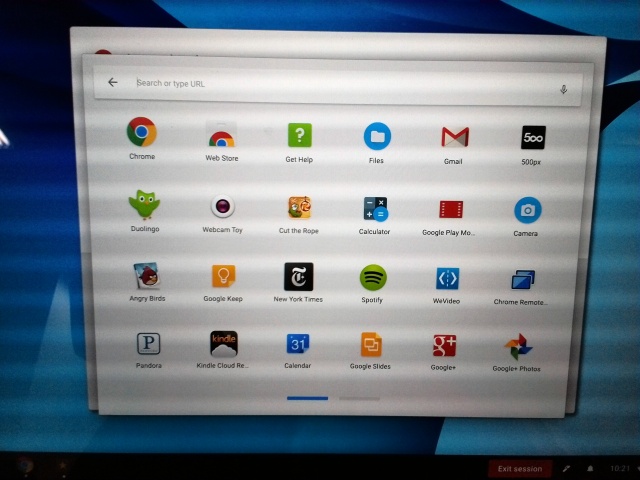 So, OK. I’m not an idiot. I’ll do an end run and go directly to the Play Store in the Chrome browser: 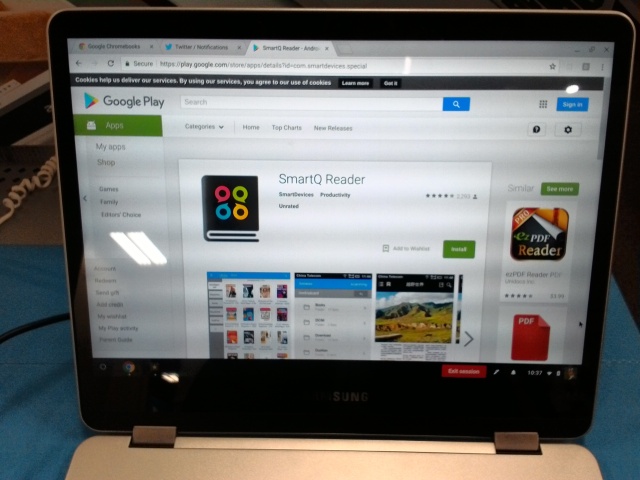 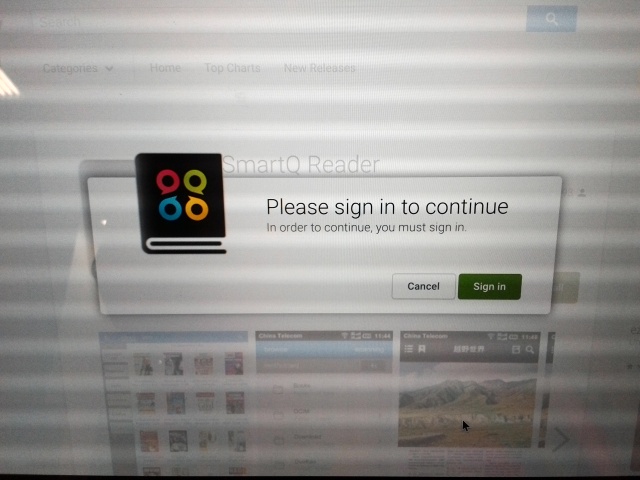 But was I desperate enough to want to try this to risk putting in my details?

Yes. Because I am an idiot: 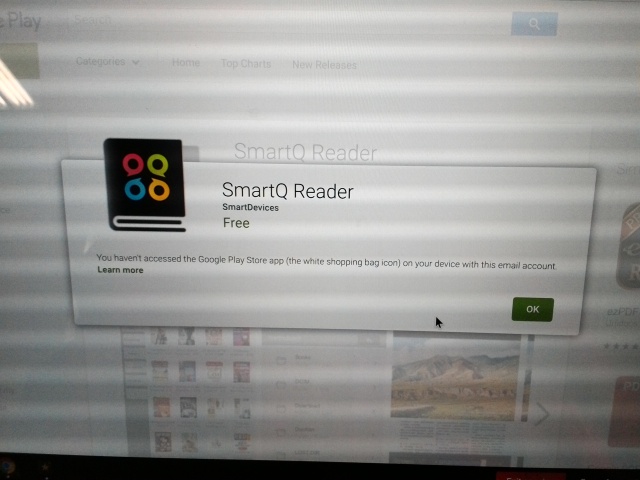 It wasn’t going to let me do it.

And as I’m typing this right now, I realize that I was an even bigger idiot at the time. I have, at my Google Books PDF Test page, a Google Drive link for SmartQ Reader I could have tried! I could have even tried the APK Downloader site.

However, if I had succeeded, I wouldn’t have known why I had failed. At the third Best Buy that day, there was a Google Rep present to pimp the Chromebooks. I asked him about the missing Play Store icon. He said that was deliberate. The units are set up in a custom demo mode that lack several things to discourage people from using them for hours. He mentioned Facebook and Twitter. Harumph. (But go back and notice the Netflix icon, so hmmmm….)

Although I have yet to try it with SmartQ Reader (something I’m thinking of going back later today to try), I did have my main question answered. It’s this: Could I read a Google Books PDF on that screen? I couldn’t on the Asus, due to insufficient pixels.

The answer with the Samsung Chromebook Plus is hell yes! 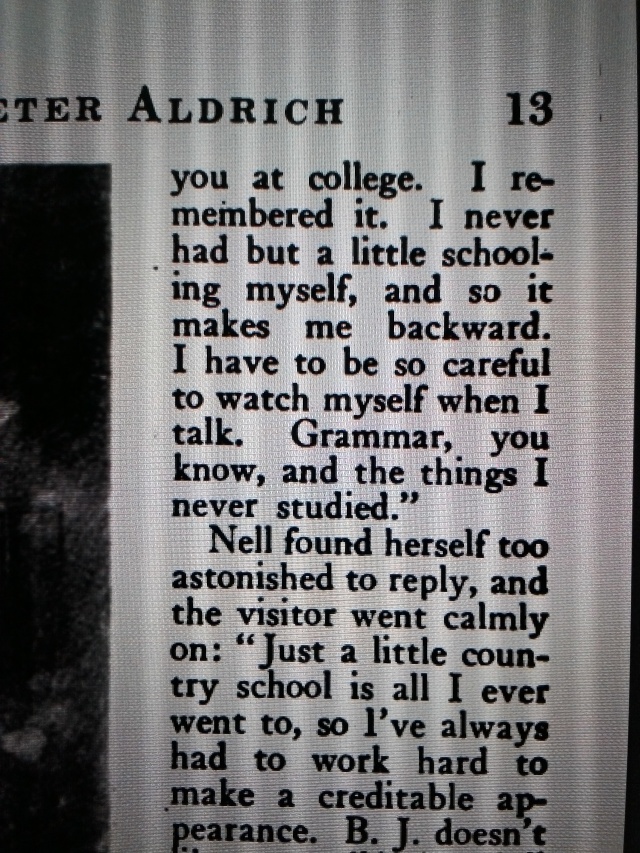 Look at that credit line under the photo of the boat, see how wee it is: 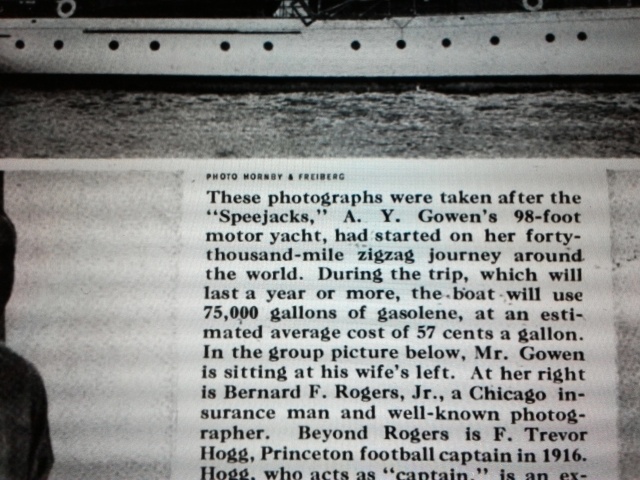 It’s sharp enough to read on the screen!

Up until this encounter, I believed I would have to bleed money and buy the large iPad Pro to read magazine-page-sized Google Books PDFs.

This is no longer true.

The Samsung Chromebook Plus can do them. And it has the bonus of being a notebook with a good keyboard (god how I detest that iPad Pro keyboard) and the plus plus plus plus of a card slot!

The large iPad Pro is dead to me for Google Books PDFs.

But which Chromebook to get? The ARM-based Plus or the more powerful Intel-based Pro?

My own thinking is to stick with the Plus because of the ARM chip.

The Intel-based Pro has to be using ARM emulation to run Android apps.

And when that’s done with Android apps, there can be problems. I’ve run across them when testing Intel-based Android tablets and even on the borrowed Asus MeMo Pad 7. Some apps just won’t run, period.

And if you’re going to spring for the most expensive Samsung Chromebook, all damn Android apps should run problem-free.

I’m just not convinced that’s ever going to happen with Android apps. Even if a handful of apps refuse to run, if it’s an app you need, you’re screwed.

All that’s left for me to do now — before ever digging up scarce money — is to get back to a Best Buy and see if I can get SmartQ Reader to install and to see how it runs. Will it take up the full screen? Will it rotate properly? What happens in notebook mode when I hit some keys? Will the file manager even work properly? (It didn’t with the Asus ZenPad S3 10.)

If anyone reading this has a Samsung Chromebook Plus and wants to try it before me, do. And leave a Comment for everyone to see. Better yet: You have a phone. Do a video and post it to YouTube.

Speaking of YouTube, here’s the video I did. Remember that the jankiness in the Chrome browser is due to a demo program running in the background that I wasn’t aware of.

Same-day update: In case I get to Best Buy today, this link is for the latest version of SmartQ Reader I’ve uploaded to Google Drive.

This entry was posted in Android, Other Hardware, Video. Bookmark the permalink.