Idiocy About Electric Bikes And Why Electric Scooters Will Win

Leave it up to a writer for the chi-chi New Yorker magazine to deconstruct — wrongly — electric bikes and manage to smuggle in a Trumpist TANSTAAFL point of view too!

And yet, immediately, there was something about electric bikes that offended me. On a bike, velocity is all. That guy on the electric bike speeding through the night was probably going to have to brake hard at some point soon. If he wanted to pedal that fast to attain top speed on the Second Avenue hill that sloped down from the high Eighties, then it was his right to squander it. But he hadn’t worked to go that fast. And, after he braked — for a car, or a pedestrian, or a turn — he wouldn’t have to work to pick up speed again.

He didn’t “work” for it? He damn well did. He paid for it. With money. From working. Moron!

And yet, after trying the AntiChrist of Bikes, he admits he liked it. As did other detractors quoted in the ridiculous piece — which ends with the ultimate comeuppance to him that only real life-life, and the French!, could deliver (I won’t spoil it).

While in the city this weekend, I made it a point to look carefully for electric bikes and electric scooters.

Of bikes, there were several. All from delivery people, shuttling overpriced food to un-self-aware writers of the chi-chi New Yorker, no doubt. Who would whine if the delivery came late and the food was cold because the guy — and it’s always a guy, usually Chinese or Hispanic — had to pedal.

Of electric scooters, there were none. Where the hell do the ones sold by NYCEWheels end up? And what about those people with Swagtrons?

But what I’ve been seeing in increasing numbers are electric skateboards. Hell, I’ve even seen them on this damn Island (where I also once saw my first carbon fiber scooter, but the guy was moving so fast I couldn’t flag him down to ask about it; I was shocked at how impossibly thin it looked at the time — about two years ago).

The best-known brand of electric skateboard is the Boosted Board, which touts more torque and speed than any carbon fiber scooter.

Now that’s just embarrassing! How can smaller motors do that?

Unlike the ones from Swagtron, the boards I’ve been seeing lack any branding. But they all have those conspicuous orange wheels. I’ve never been able to ask a rider what brand they have because they’re too busy shooting by me in a bike lane. Besides, I wouldn’t want to get them to stop quickly and risk injury. I must wait for someone who has already stopped.

But as far as I’m concerned, electric skateboards are electric scooters. Without a handle.

They’re not something I’d buy because my balance is shit and I’d quickly wind up in a hospital bed. But an electric scooter, with that handle, I could do that.

And so could so many others who wouldn’t dare try an electric skateboard.

Electric skateboards are the harbinger of electric scooters. As I quoted in my first post on this subject:

New Yorkers were way ahead of the press and the politicians.

One final note. Ad targeting for the win: 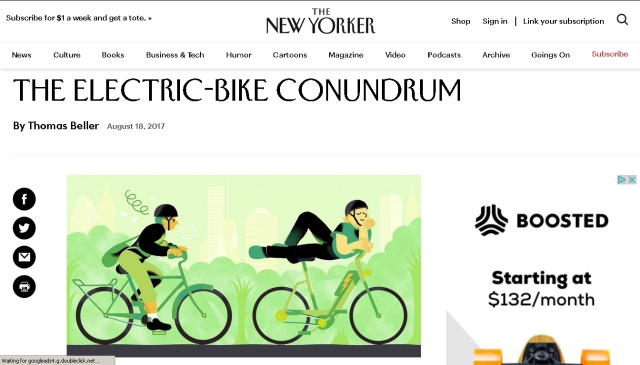 Ads for the Boosted Board and Swagtron appeared next to the article.

This entry was posted in eScooters, So Stupid It Hurts. Bookmark the permalink.