The Science Of Getting Rich 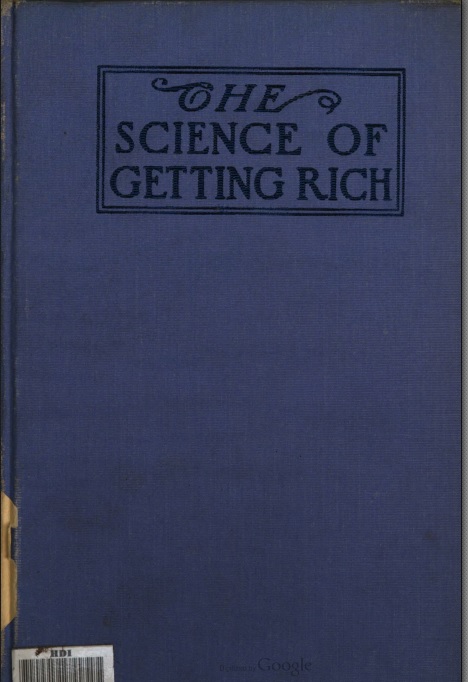 The Science of Getting Rich by W. D. Wattles is a title many people might have heard of but can’t exactly place. It was the basis for a book and a movie called The Secret. But you’d never realize that after reading the original book! The Secret basically flung aside the logic and thought of the original book and made “The Universe” sound as if all a person had to do was make a wish for something to come true. Anyone who ever wondered why that didn’t work for them should go to this book.

This is how the book begins:

That’s quite a different slant on things than taken by The Secret!

This is the start of Chapter One:

I can already imagine the objections out there, such as, “But what about Buddhist Monks? What about Priests? What about Minimalists? What about …?” Context: This is a book for people who live in the First World or aspire to do so. It’s not for those who have chosen to renounce such a state of existence. It’s amazing how some people want to start a journey down a road by setting down a roadblock first! Here’s a big damn hint for you: If you’re reading this post, this book applies to you. You’re already enmeshed in a system where it’s better to get rich. As Jim Rohn said (and this is the second time I’m repeating it):

And after having read this book, I think part of learning it is reading this book.

Wattles then goes on to form a string of logical thought that, in the end, actually makes sense.

Here’s an example of the logic readers can expect:

That can’t be argued with. History has shown this is a fact. To slice it even further, within a family, one person gets rich while the others don’t. Nothing puts people closer than sharing DNA!

This book has a 1910 Copyright date. The Wright brothers flew at Kitty Hawk seven years earlier, in 1903. The start of commercial aviation didn’t begin until 1914 — four years after this book was published. So this excerpt is remarkable for its foresight:

And here is the first encounter with the maddening concepts of belief and faith (which is not yet labeled as such):

Let’s have an example of that. Mark Zuckerberg, coding away in his Harvard dorm, creating what would become Facebook. But what was the reality at that time? MySpace dominated. What chance did he have against that behemoth? Everyone (including me!) was already on MySpace. Why did anyone need Facebook? But Zuckerberg didn’t go by reality — by appearances. The same could be said of the electric scooter rental companies today, who just dump a bunch scooters into a city and ignore the appearance, the reality, of any opposition. And I must cite the story of Stephen La Rivière, who didn’t let absolute ignorance hamper him.

Are there things in this book I can argue against? Yes. How can I reconcile this …

Max Gunther, however, wasn’t writing about belief and faith. His books are all about the material world and how to negotiate through society.

Here is something that raises questions, especially today:

Let’s take the example of Steve Jobs from just one angle. He was a creator (and I’m not ignoring Wozniak by saying this), bringing the first mass-market microcomputer (as they were called then) to market. But he soon found himself competing. What’s interesting, however, is that he competed in his own way, as a creator. Think back to the Think Different marketing campaign, which was a pure statement of Apple:

There is truth here:

And to cite Apple yet again: If they had competed, they would have never innovated. Everyone would still be walking around today, for example, using cellphones with dialing and function buttons on them: 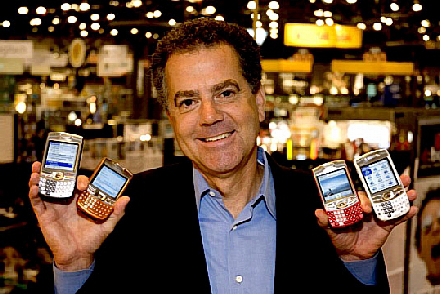 Which prompts me to repeat an earlier excerpt to drive home the point:

Thinking that is original is hard damn work!

There is an entire chapter here about gratitude (a buzzword flung about these days). I’m just going to cite this …

… because it immediately summoned to my mind this:

If you’re a non-believer and scoff at that, you’re just missing the point!

That excerpt also made me think of this Zig Ziglar video (which should be more palatable to non-believers):

This is a different way of seeing things I haven’t encountered before:

There’s more before and after that, but I don’t want to reveal everything.

Chapter 8 is perhaps the nexus of the entire book, what everything leads to and proceeds from: Thinking In The Certain Way. I’m not going to quote any of it. I’m just going to say that it ties in with Thou Shall Prosper: Ten Commandments For Making Money, The Magic of Believing, and several other “self-help” books. That’s also where my problems with belief and faith come in, but that discussion is something I’ll save for another day after my wrestling match with them is finally over. But I do want to quote Ecclesiastes 9:11. Most translations have what is boldfaced:

I have seen something else under the sun: The race is not to the swift or the battle to the strong, nor does food come to the wise or wealth to the brilliant or favor to the learned; but time and chance happen to them all.

But one translation adds a point of view:

And as much as I want to digress about how that is key to my wrestling match with belief and faith, I will bite my tongue.

Therefore I tell you, whatever you ask for in prayer, believe that you have received it, and it will be yours.

This is an idea many will disagree with:

All I will do here is refer people back to the Zig Ziglar video. The woman came to Ziglar for one thing and wound up with another. While impoverished people do require help, what they actually need is something more. Wattles goes on a bit more in that vein and that could be a stumbling block — moreso than belief and faith — for many people with a certain political slant. But that will be their problem to wrestle with. And here’s an even bigger one for them, which comes from life itself (not from Wattles): Not everybody can be saved.

Chapter 11 — Acting In The Certain Way — is where The Secret diverges from the book and becomes free-floating make-a-wish nonsense. Wattles never advocated sitting back and waiting for manna to drop from the sky. If The Secret had ever mentioned that actual effort was required people would have wondered why they should even bother. Wattles’ book is for everyone who already understands nothing gets done without taking some form of action.

This is absolutely true:

That’s called a cascading failure. And in Thou Shall Prosper: Ten Commandments For Making Money, Rabbi Daniel Levin essentially lays out God’s shape of the world which includes this key sentence:

I have set up the world in mysterious and counterintuitive ways.

That is everything right there.

The penultimate chapter opens with: 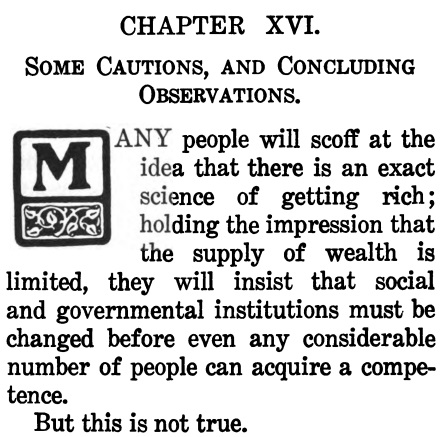 And for anybody who wants to know why that isn’t true, go back to the start of this post and download the book itself to read.

I didn’t have any plan to read this book at this time at all. I started watching a video last night. For some reason, it upset the cats and I had to stop watching. I didn’t have a library loan book that was short enough to read in a few hours and it popped into my head to go to Google Books. Once there, I remembered the Wattles book that was in my Infinite Backlog. Curiosity made me grab it. And that’s how this post happened.

As I said in the beginning, Wattles lays everything out logically. But I have a problem with logic too. Logic is great for argument and computer programming and science, not so for people. And this book, obviously, is for people. Which brings up the question: Is it telling the truth?

Unlike too many books that have come after it, there is no ring of hucksterism in it. Wattles is sincere. As to whether or not it works, Wattles asks the reader to try it for themselves for proof. This is why the book is called The Science of Getting Rich. I think this book inspired Claude Bristol to write The Magic of Believing. There are many similarities. And both Phyllis Diller and Liberace acted on that book and found it to work for them.

I now consider Thou Shall Prosper: Ten Commandments For Making Money the first “self-help” book people should read. The Science of Getting Rich as second. With the books by Max Gunther next.

Oh, the famous One More Thing: Nowhere in this book is there mention of a “Law of Attraction,” that nonsense from The Secret. What Wattles asserts in the book is entirely different and contingent upon other things residing within the individual.

This entry was posted in Human Variables, Video. Bookmark the permalink.

2 Responses to The Science Of Getting Rich