Mellow Drive On A Folding Skateboard

I really thought he wouldn’t be able to pull it off. I didn’t think the board would fold. It still does. Not completely, but enough.

I just got word today that the Onan Booster X2 can’t fit on an ELOS kick skateboard. If that can’t, neither can a Mellow Drive. So much for my Mad Scientist musing!

The setup Ronnie has there really intrigues me. Being able to fold the board removes the problem of carrying a longboard.

Look! It has a handle!

Also, that looks easier to hook onto a backpack.

And the fold hides the electric bits. I’ve asked Ronnie to weigh that setup.

Until today, I hadn’t even thought of a folding skateboard. All the experienced riders say a longboard makes a real difference in riding. The longer deck with some bounce to it helps smooth out the ride. And a longer stance helps with stability.

After the break, Ronnie’s first video encounter with the folding board.

Ronnie not only gets the coolest stuff, he gets the stuff that makes me think before spending money. That’s a good thing. 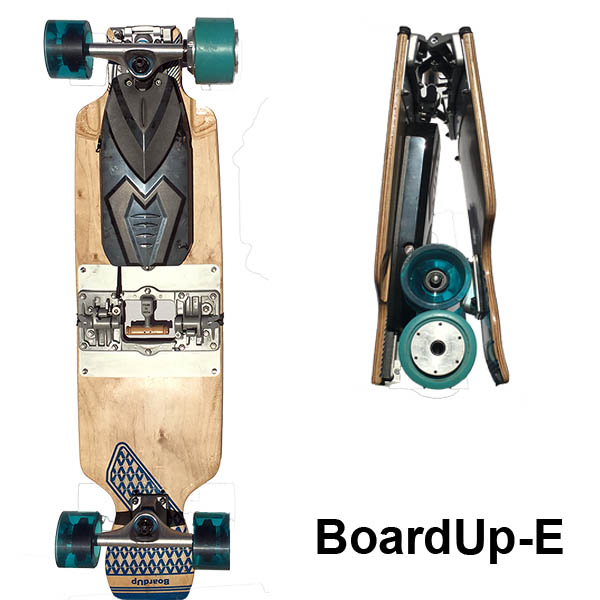 Second same-day update: Board-Up also offers an electric kit. And what’s weird is that one of their photos shows it attached to an ELOS kick skateboard!

Even weirder is that they’ve put the single hub motor at the front of the ELOS.