The return of two things I love: Supermarionation and the YouTube series Falcon 1! Plus, Firestorm!

Endeavour is an ITV series showing the early days of Inspector Morse.

The second episode of the sixth season featured the return of Supermarionation, the puppetry technique created by Gerry Anderson‘s team in the 1960s. 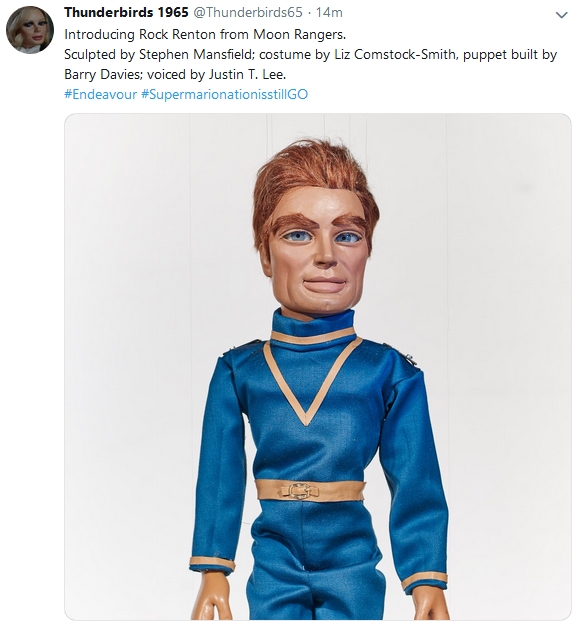 After the break, videos!

Endeavour: Moon Rangers Behind the Scenes

There was a pirate version of the entire episode on YouTube as of yesterday (post time’s yesterday). In less than 24 hours, it was DMCAed away. Ah, well. Catch it when it airs in the U.S. … somewhere.

Falcon 1 is a puppet series that’s been on YouTube for several years now. I’ve done posts in the past and the series is fun watching. No budget? No problem! It’s driven by passion! The 1960s me wishes he had the tech (and money!) back then because this is something I wanted to do as a kid. There are slicker things to watch on YouTube, but nothing beats Falcon 1 for sheer enjoyment.

There are now three “seasons” of Falcon 1. And there’s a been an improvement in the puppets.

The faces are smoother and the uniforms are tailored better. There’s some dedication here that’s to be applauded.

Careful viewers will also note that they’re now using heads with expressions! In other words, they’re taking the time to swap out a neutral-expression head for one with a smile or a frown! Dedication!

And there’s also the return of Bob the Robot! He has a killer first line in season’s 3 opening episode. He also steals the entire scene, just like the Zeroids always did in Terrahawks!

Same-day update: There’s a Falcon 1 Tumblr! Wow, the puppets are taller than I imagined.

Overdue for coverage here is the full minisode of Firestorm.

This entry was posted in TV, Video. Bookmark the permalink.