Japan’s bike parking is amazing. Until you see what a company in Spain has.

Alternative Wheels. I don’t like the term “micromobility.” In fact, I hate it. It sounds like tiny wheelchairs. The person who coined that marketing term apparently never saw TV ads in American for “mobility devices” — which are basically motorized wheelchairs. Alt-Wheels are these: pedal bikes, kick bikes, handbikes, recumbent bikes, pedal tricycles, electric tricycles, electric bikes, kick skateboards, electric skateboards, kick scooters, electric scooters, electric unicycles, and the Onewheel. In Singapore, anything small and electric is separated from that bunch and they’re called PEVs: Personal Electric Vehicles. (And, by the way, while cyclists look to Denmark, it’s Singapore that’s the world leader in electric Alt-Wheels.) I don’t like using the term “vehicle” because that’s a legal term. And if governments start considering Alt-Wheels as that, we’ll have “rider’s ed,” registration, licensing, and insurance requirements for all of them. And that damn well should not happen until Alt-Wheels have street parity with cars, trucks, motorcycles, buses, and everything else of that ilk, gas or electric. 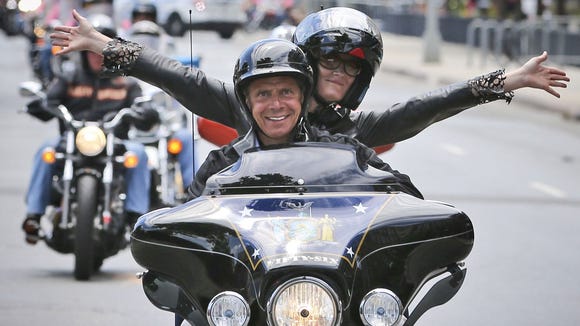 It’s OK for him to ride that — and like that — but us peasants have lightweight and low-speed rental eScooters? Not yet. Because “safety” or whatever. Meanwhile, look at what he’s riding! (Source.)

Opinion | How an E-Bike Changed My Life

Cycling, like everything else, has gotten harder as I’ve grown older. For much of the year, I live on a dirt road at the bottom of a mile-long hill, and some days I just don’t have the energy to make the ascent. Last summer, I was on my bike a total of five times.

Since I got the e-bike, though, I’ve been riding 15 and 20 miles a day, four or five days a week. It’s been life altering, not just making me fitter, but also raising my spirits, getting me out of the house and back into the mountains.

She also mentions something from the 1960s that totally slipped my mind. The Vroom! bike. Here’s a TV ad for it:

And a video from someone who kept one in mint condition:

Mopeds for rent are taking over cities. We rode one, and it turned heads everywhere we went.

I discovered what many people worldwide already know: It’s pretty fun to zip around the city on a compromise between a bicycle and a motorcycle, tugging on the sensitive throttle and weaving through the impressively bleak array of potholes, metal plates and torn-up asphalt.

Just like a bicycle, the moped unlocks a layer of the city you can’t feel in a car blaring Spotify. The whoosh from a passing truck cascades over your face. You can hear parents gently scold kids at intersections. Cyclists become friends for the span of a red light. The city feels bigger and smaller to you all at once.

In all, I scooted about 33 miles across five trips, spending $61.49. That’s less than $2 a mile, even including the practice runs.

Mopeds had a big publicity splash in the 1970s and they were gas-powered at the time. Still, I reallllly wanted one. But even then New York City was backwards and immediately banned them. Now I wonder how much lobbying was done by car makers to create that ban. They’re still technically illegal in NYC so it’s pretty strange to see Revel allowed to operate here at all.

We tried the Revel scooter rental in Queens!

Note that I have no connection to them or the discount code they promote. This blog is graft-free.

The city slammed the brakes on plans to halt dockless bike-sharing in Queens — and will keep the wheels rolling in the Rockaways.

The move came a month after the Department of Transportation would scrap the bicycle pilot program at the summer’s end, spurring a backlash along the Queens shore.

Boldface emphasis added by me.

Op-Ed: To Break the Car Culture, Reduce the Number of Parking Spots

So, if we were to eliminate half of the city’s parking spaces in order to support [New York City Council Speaker Corey] Johnson’s goal of lessening the number of cars by half, how many would that be?

Changing things in NYC won’t happen until it has a different spin than “breaking car culture,” “ban cars,” and “war on cars.” Or we can just sit back and wait for some damn disaster to happen that would make driving all motor vehicles impossible. I prefer changing the spin and making some progress. 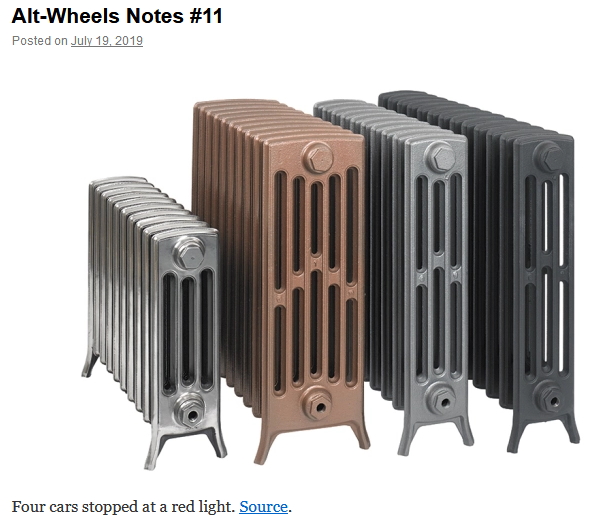 And now this: Exhaust Pipes Are Making Boston’s Heat Waves Much, Much Worse

The long-term climate impacts of the climate pollution from cars and trucks are well documented, but the daily short-term effects of the wasted heat energy radiating from engine blocks and exhaust pipes are making this summer’s heat waves much more miserable for city-dwellers.

As anyone who’s walked or biked across a busy street knows, cars and trucks stalled in traffic can emanate oven-like blasts of heat into their surroundings.

Can we get many, many, many more publications writing about this? And TV news too. Where’s The Weather Channel on this? We need Science to really push this so politicians have some third-party justification to ban cars on hot days and during heat waves.

In its eleventh hour, Nashville Metro Council rejected a call for a ban on electric scooters in Nashville.

In the last council meeting of the four-year term, councilmembers voted Tuesday night against legislation by Councilmember Steve Glover for a complete and full ban in a 7-24 vote.

It was the last option left in the fate of scooters for the body of city legislators that paved the way for them to roll onto Nashville streets last summer.

It’s good to see the Council override the Mayor, who wanted an outright ban of all rental eScooters.

In a marketing email. Boosted announced its Rev eScooter now has a ship time of between 7 to 14 days:

Sounds like just the kind of board for someone who loves to tinker with their car.

Here’s a video that contrasts the feel of a King Song 16X when its 3-inch tire is replaced by one a half-inch narrower:

A tip for developing balance:

HOW TO GET EPIC BALANCE !!! – ELECTRIC UNICYCLE TUTORIAL

In the last edition, we had a video of a new Onewheel Pint owner. He’s explained his background and prior riding experience:

I’ve ridden an electric skateboard a couple times and I have a normal longboard skateboard. But this is so different.

And now here is his second ride:

Chris Richardson is a veteran Onewheel rider whose YouTube Channel includes riding lesson videos. In this video, he highlights a build problem with the Pint and how to fix it:

Seeing that misalignment problem makes me wonder if that’s been one of probably several issues that accounted for the Pint’s delay.

Bag Week continues over at TechCrunch:

Secure storage for Alt-Wheels — otherwise known as parking for cars — needs to be a municipal priority. Cities were reshaped for motor vehicles. It’s time to give Alt-Wheels parity. In the last edition, Utrecht in The Netherlands announced the completion of their facility for 12,500 bikes. Below, we see videos of other storage solutions.

Even law-abiding Japan understands the need for secure storage:

But as impressive as Japan’s robot system is, Spain has the ultimate parking for Alt-Wheels, the Biceberg.

It’s a true pod. You could put an electric skateboard, electric scooter, electric unicycle, or Onewheel in it. It wouldn’t matter! This is what New York City needs.

Biceberg is so good, they’re trying it in Singapore!

Smart bike parking: where bikes are safer than cars

It’s sad that here in America, the only solution put forth has been the Ooneepod.