Alternative Wheels. Which differs from “micromobility.” That’s all in this post.

Here is my proposed a solution to moving things along:

In every locality that an eScooter rental company enters, they must hold thirty days of free lessons to people in a variety of locations. A full damn month of teaching people how to ride and the local laws about riding (because each municipality can set their own conditions) should increase the safety factor. These 30 days of free lessons should be held before any rental eScooter company is allowed to deploy their fleet to the public at large.

Now add that, get the Assembly and Senate to agree, and sign the damn bills! 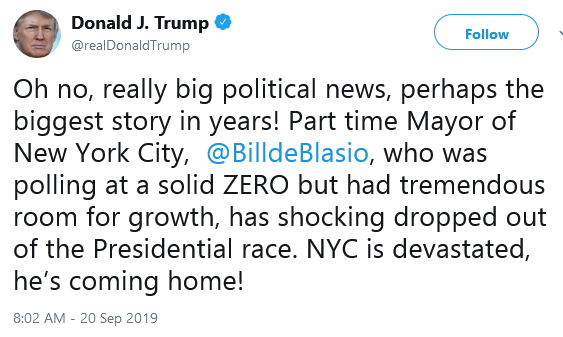 Why Is Bill De Blasio Trying to Kill Me? New York’s Mayor Claims to Be Progressive but Favors Drivers Over Bicyclists.

I never expected that a phrase I often whispered to myself at the end of a busy day in a war zone — “I could have died today” — is one I continue to whisper at the end of a two-wheeled journey home. And I’ve got it easy, because I don’t ride a bike for a living, all day long, as legions of low-wage workers must do in the messenger and food-delivery trades.

Verrazzano Summer Streets is opening access to a lane of the Verrazzano Bridge for pedestrians and cycling this summer.

When it opened, everyone was disappointed that it was exclusively for motor vehicle traffic. Other bridges in NYC were walkable. In 1964 only the upper level was completed and people wanted the lower level to have a walkway. When the lower deck was completed in 1969 it also lacked a walkway. After fifty damn years, it’s time let us have access to some of the bridge at least a little of the time. I want this idea to happen so much!

Downward dogs and yoga mats have replaced cars and buses on London’s Tower Bridge as part of Car Free Day.

The mass yoga session was one of a number of activities taking place in the capital as more than 16 miles (27 km) of streets were shut.

Not the best way to sell car-free streets. I can imagine car drivers who have a valid reason to get somewhere being pissed-off by such frivolity. And I can’t blame them. The frivolity should be saved for after victory.

When she begins noticing other parents pedaling cargo bikes online, she immediately wonders: Why were there no cargo bikes to be seen in Fairfax?

Canning is careful not to portray these parents as hardcore eccentrics or extreme athletes but as ordinary people in ordinary towns making out-of-the-ordinary choices, just like her. “I’m not an athlete. I’m not superhuman,” says Brent Patterson, a father from Buffalo, New York. “I’m just a completely normal person like you.” It’s a heartening takeaway: if she can do it, so can we.

Advocates of cars vs bikes think it’s all a tug-of-war. That’s why hardly anything is accomplished. Did the woman in the above excerpts have anyone screaming at her to surrender her car for a cargo bike? No. She wasn’t pushed to the idea — which is the method all of the current advocates use today. She had to attract herself to the idea. She didn’t surrender at all. She willingly chose. This strategy is something totally alien to the chest-beating advocates who stand tall on their perches of self-righteousness.

Jump, Lime, Scoot and Spin will all become a permanent presence on The City’s streets. And those e-scooter companies will be able to run in more neighborhoods than they were previously allowed to, spreading to San Francisco’s West Side.

That’s per an announcement Wednesday afternoon by the San Francisco Municipal Transportation Agency, which unveiled the next phase of its Powered Scooter Program.

Did anyone doubt? I never did.

Cyclist, 65, in a coma after accident with e-scooter rider in Bedok North

A 65-year-old woman is in a coma after her bicycle collided with an e-scooter in Bedok North on Saturday night (Sept 21).

Madam Ong Bee Eng, a logistics assistant packer, suffered a serious brain injury as well as fractures in her ribs and collar bone after she collided with the 20-year-old e-scooter rider.

Madam Ong was unconscious when she was taken to Changi General Hospital (CGH).

The police confirmed that the man, who was conscious when he was taken also to CGH, was subsequently arrested for causing grievous hurt by rash act.

Police officers are seen carrying a large e-scooter believed to be involved in the accident.

According to Shin Min Daily News, the e-scooter is suspected to have been heavily modified and exceeded the weight limit.

The allowed weight limit for PMDs, bicycles and power-assisted bicycles is 20kg.

The photo accompanying the article shows a muscular Dualtron-like eScooter. This is the type of eScooter Singapore’s Land Transport Authority has banned and wants people to turn in for $100 and free disposal (see below).

And the sequel: E-scooter that knocked into cyclist in fatal Bedok accident should not have been used on public paths: LTA

A 20-year-old man was arrested after the accident for causing grievous hurt, and police said on Wednesday they were investigating the case as one of causing death by a rash act.

The offence carries a jail term of up to five years and a fine.

Separately, the LTA said on Thursday that the man could have committed an offence for riding a non-compliant PMD on a public path under the Active Mobility Act. This could result in a fine of up to $5,000 and/or three months jail.

$100 incentive for early disposal of e-scooters that do not meet safety standards: LTA

Owners of registered e-scooters that do not meet stipulated safety requirements will receive a $100 incentive if they agree to dispose of their personal mobility devices (PMDs) early, said the Land Transport Authority (LTA) amid growing concerns of fires linked to the devices.

Over six months from Sept 23, 2019, to March 31, 2020, PMD owners will be able to dispose of their non-UL2272 certified devices at 180 designated disposal points set up by LTA-appointed e-waste recyclers across HDB estates, or at the LTA’s Sin Ming office.

E-waste recyclers appointed by the LTA are trained and equipped to ensure the safe disposal of PMDs, as well as the recycling of any reusable materials and components.

They would typically charge a fee for disposal but the LTA said it is facilitating this disposal – for an estimated 80,000 PMD owners – at no cost to them.

It won’t get all those eScooters off the street, though: What you need to know about LTA’s free e-scooter disposal and $100 incentive.

More Singapore: 450 applications on Day 1 of early disposal scheme for e-scooters that do not meet safety standards

About 450 applications to dispose of registered e-scooters that do not meet a fire safety standard in exchange for $100 have been submitted on the first day of an early disposal scheme, the Land Transport Authority (LTA) said on Monday (Sept 23).

Even more Singapore, unfortunately paywalled: PMDs should not be banned outright, but more regulations and infrastructure needed: Expert

Yet more Singapore: 270 reports of errant PMD and e-bike users received in a month through LTA transport app

Members of the public have filed 270 reports against errant users of personal mobility devices (PMDs) and power-assisted bikes (PABs) in the month after a new in-app reporting function was introduced.

These reports have helped the Land Transport Authority (LTA) validate hot spots on its radar and also identify new areas for enforcement, the authority said on Tuesday (Sept 24).

The LTA introduced the Report PAB/ PMD function in its MyTransport.SG app on July 31, as part of efforts to improve enforcement actions against errant users. The app has about 700,000 users as of July.

It received 30 reports by 5pm on the first day the feature was introduced, and 270 reports by Aug 31.

To reiterate: Singapore is the world leader in accommodating Alt-Wheels. The next article from May 2019 reflects the kind of debates that will take place in countries around the world: The Big Read: Calls to ban PMDs mount as accidents persist — but is it the best option?

Impounded Bird scooters for sale in Richmond for $105 apiece

Electric scooters owned by California-based Bird that have been held in impound in Richmond since last summer are being sold at Seibert’s, a Southside-based towing and auction company.

One of the giants of the nascent on-demand electric scooter market, Bird dropped hundreds of scooters around the city in August 2018, only for the city to impound them for code violations.

While it’s still up in the air as to whether Bird plans to relaunch legally in Richmond, the company apparently never returned to town to pick up its scooters. That leaves Seibert’s free to unload them, which it is doing for $105 apiece, according to an email the towing company sent out Wednesday.

They sold out quickly. Why buy one? To disassemble and sell as parts for a profit. Just about useless otherwise (despite being able to transform them for personal use; see here and here).

But it’s unsaid what he spends on Lime rides.

E-TWOW introduced a new model with the kind of inept marketing I expected from an eScooter manufacturer:

The Arc Boards team does some rugged, powerful, and a bit expensive electric skateboards that have found fans worldwide. This is an owner’s update about Arc’s first eSkateboard model after a year of use:

Pavel Garmas is back, with a good recommendation for those with electric skateboards using pneumatic tires:

Watch someone learn to ride an electric unicycle in about an hour:

I asked about that time interval and this was the reply:

Yes. I have tried those steps with several riders now. The kicking on and off seems to help the most because they learn to center the wheel with the dominant leg. The first step is just for getting a feel of the wheel and how it works. Then there were some details like how to take corners, curbs, etc that I could have gone through with him. We went for a short cruise afterwards and he dropped the MSX a couple of times. So there are some concepts as the apex in turning which deserve to be discussed.

Mario Contino appears here again, comparing the pushback of the Onewheel XR to that of the new Pint:

Jimmy Chang makes yet another appearance too (with an ad unfortunately embedded about halfway in):

Record-setting Onewheel group ride? Even if not, it’s still impressive: 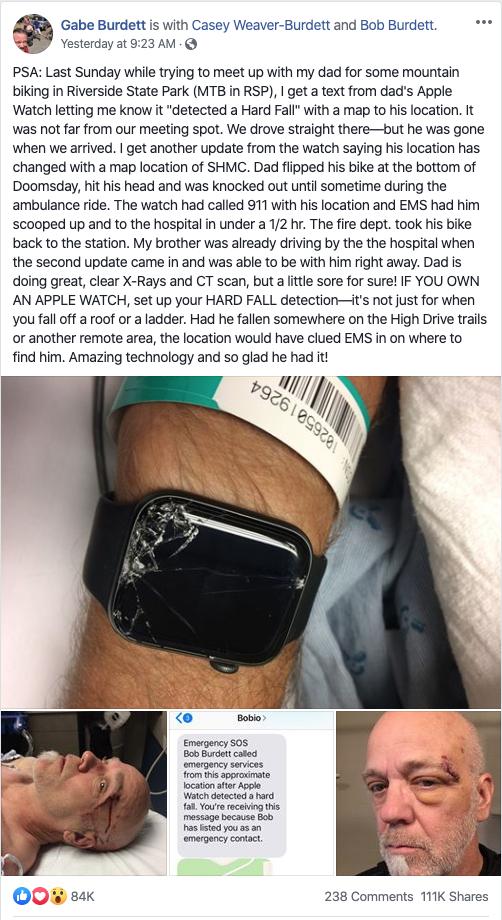 That Apple Watch used an emergency system that I don’t think is available in the U.S.: INFORMATION ON AML

Why our streets need to change: