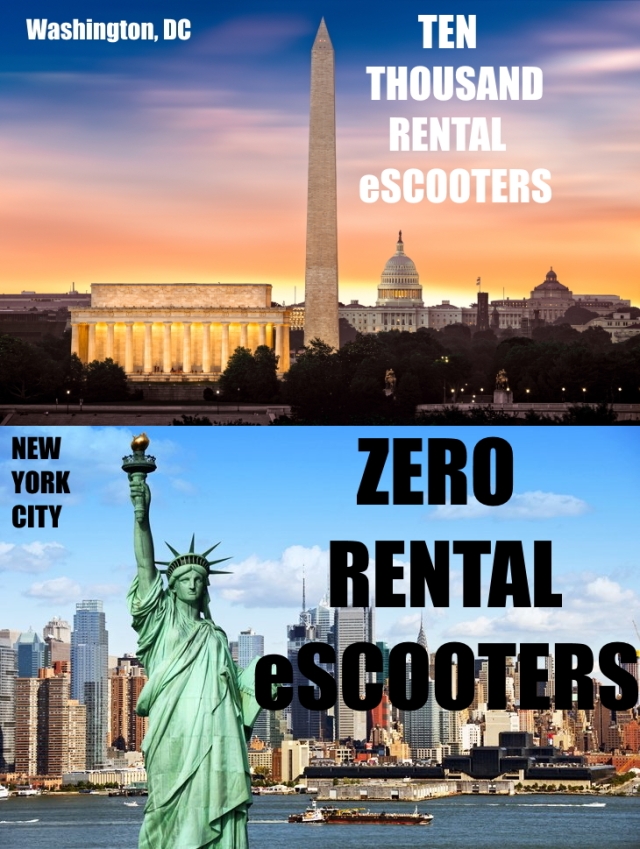 Washington Post: There could be up to 10,000 scooters on D.C. streets come January

Alternative Wheels. Which differs from “micromobility.” That’s all in this post.

Here is my proposed solution to move things along:

In every locality that an eScooter rental company enters, they must hold thirty days of free lessons to people in a variety of locations. A full damn month of teaching people how to ride and the local laws about riding (because each municipality can set their own conditions) should increase the safety factor. These 30 days of free lessons should be held before any rental eScooter company is allowed to deploy their fleet to the public at large.

Now add that, get the Assembly and Senate to agree, and sign the damn bills!

The anti-car sign that led off Alt-Wheels Notes #29 has more to say:

More pictures and an actual video at the link. Praise to the signmaker! I love seeing that sign after having to put up with one from the city saying this:

I still think a bonfire should be erected around that sign to incinerate it when the law is changed.

I used to think calling cars “death machines” was kind of extreme. Then my niece was hit by one.

She was only 9 years old, out with her family in Los Angeles and running toward an ice cream truck. She was hit with such force that most of her front teeth were knocked out. She is lucky to be alive.

Thinking about my niece made me recall all the other times members of my family had been injured by cars. My husband’s grandmother was killed. My aunt and uncle were seriously injured. I was even involved in a hit-and-run in a crosswalk in front of my school when I was a kid and broke my leg.

There’s Nothing “Controversial” About Bike Lanes

‘An e-bike changed my life’

It says something that they had to add this in the middle:

How upstanding in other aspects of their lives are the hardcore cyclists? Shove your “cheating” slur up your bike seat. You should be welcoming every new rider, not shaming them!

The other side of banning cars: Car Free Cities Risk Excluding Disabled People

I’m visually impaired and use a white cane, just in the last week I’ve been verbally abused and shamed for using a priority seat on the bus and on the tube and someone overenthusiastically nearly pushed me down an escalator. I frequently experience hostile behaviours from members of the public when I do something as simple as use my phone on public transport, because of course blind people can’t use phones so I must be faking[.]

… Multiple disabled people have contacted me to say they are just too frightened to use public transport because of the harassment and behaviours they experience, and a car can provide a safe space for them to travel stress free. 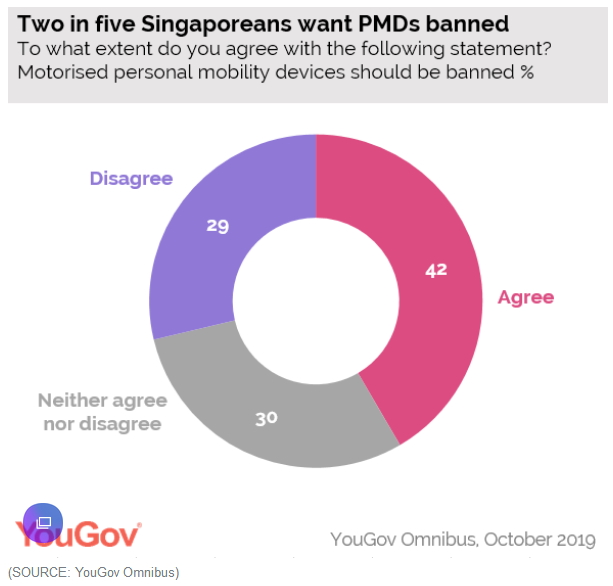 49 per cent of respondents ranked it as the most dangerous mode of transport, ahead of cars in second place at 19 per cent.

But that even a quarter of the youngest group want a ban is shocking. And yet there is hope:

The survey polled 1,116 Singaporeans via YouGov’s Omnibus online research service from 3 to 4 October, a week after a 65-year-old cyclist, Ong Bee Eng, succumbed to her injuries following a collision with an e-scooter. Authorities later announced that the PMD was non-compliant.

The unscientific non-random sample probably doesn’t reflect the actual overall sentiment. Besides which, the LTA itself will not institute a ban because people rely on PMDs.

Singapore: Pedestrian dies from injuries 5 days after getting hit by bicycle

A 28-year-old e-scooter rider was jailed six weeks on Tuesday (8 October) for colliding into a 53-year-old pedestrian, causing the victim to suffer from several leg injuries.

A Sujendran rode at a speed of 28kmh and did not slow down, even as he approached a lift landing.

He hit Mohamed Salam Kadir, who had just walked out from the ground floor staircase to the lift landing on 6 May last year.

Sujendran, a cleaner and part-time pump attendant, pleaded guilty to one count of causing grievous hurt to Salam, a bus captain, through a rash act by riding his e-scooter at an unsafe speed and failing to keep a proper lookout.

This has international repercussions. An XVE charger is being offered by a UK seller. Also, PassionGadgets has a YouTube Channel. Their trustworthiness has just plummeted to zero.

Singapore: Mandatory inspection for e-scooters every 2 years from April 2020: LTA

From April next year, all new e-scooters will be required to pass the inspection before they can be registered for use on public paths, said LTA.

“Retailers and businesses will only be able to display, sell or lease devices that have passed the inspection and bear the requisite registration mark,” it said.

Those found guilty of riding an unregistered e-scooter on public paths can be fined S$2,000 and/or jailed up to three months.

It is also illegal to ride non-compliant e-scooters on public paths. Offenders can be fined S$5,000 and/or jailed up to three months.

In California? Put your damn car to some good use and go to this: 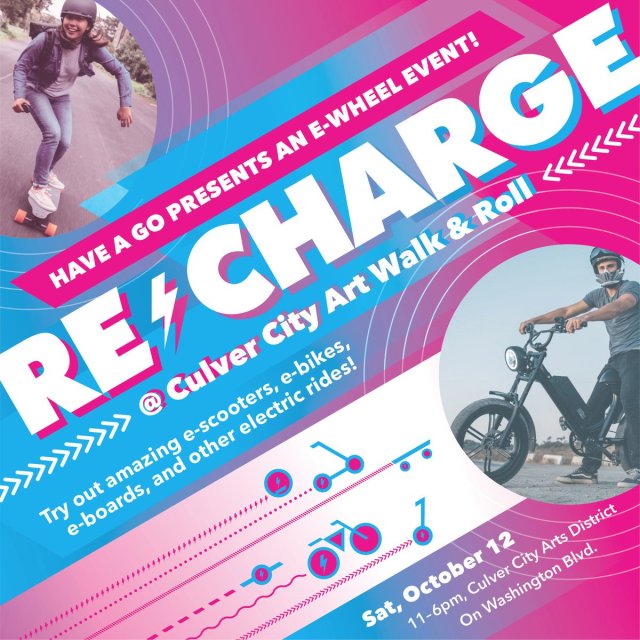 You’ll be able to see — and maybe even test ride — Alt-Wheels from these brands:

An event that could change your life.

Pirate is in Notes again, this time contrasting the ability of his DIY beast of an electric skateboard against an eScooter of a class a bit higher than the ones rental companies began with:

Jimmy Chang appears here again, this time with a very scenic video and a bunch of practical riding tips:

And the chart below shows that.

This is the final edition of Alt-Wheels Notes. There will be no more.

I’m about to cease doing the Alt-Wheels Notes posts. I’ve been encountering my own resistance in doing them. Thinking about that made me realize why. As far as I’m concerned, I’m documenting the now. I was ahead of things with my first formal post about Alt-Wheels — The Future For NYC: Portable Electric Scooters. I was there before there were any rental eScooter companies. Now there are many, cities are being conquered by the sheen of Silicon Valley (which, it seems, it what it takes to get any change for Alt-Wheels; individual ownership before those companies existed didn’t do a thing), and the subject is boring me.

There will probably be standalone posts on the subject. But these compilation posts are over.