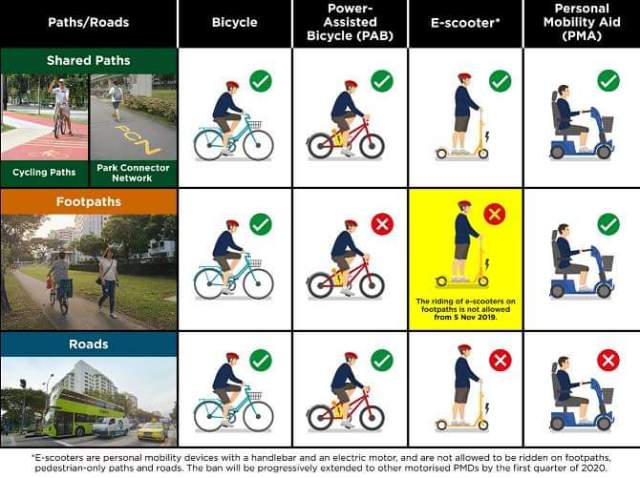 Rogue eScooter riders — who mainly have the kind of eScooter outlawed by the Land Transport Authority — have been making life miserable for people by riding on the street, in building common areas (void decks), and speeding on footpaths. Non-rider injuries and deaths have resulted. Now the LTA has banned them from footpaths beginning tomorrow, November 5th. Next year this ban will be extended to hoverboards (do people even still have them?), electric skateboards, electric unicycles, and the Onewheel.

But here’s the cascade effect:

Following recent accidents involving PMDs, the Minister for Transport has issued a safety directive prohibiting e-scooter sharing services. Hence, LTA will reject all existing licence applications and will not be inviting applications for PMD sharing licences until further notice.

This is what happens when government allows people to make things worse for everybody. The guilty make everyone suffer.

Also from LTA, a timetable: 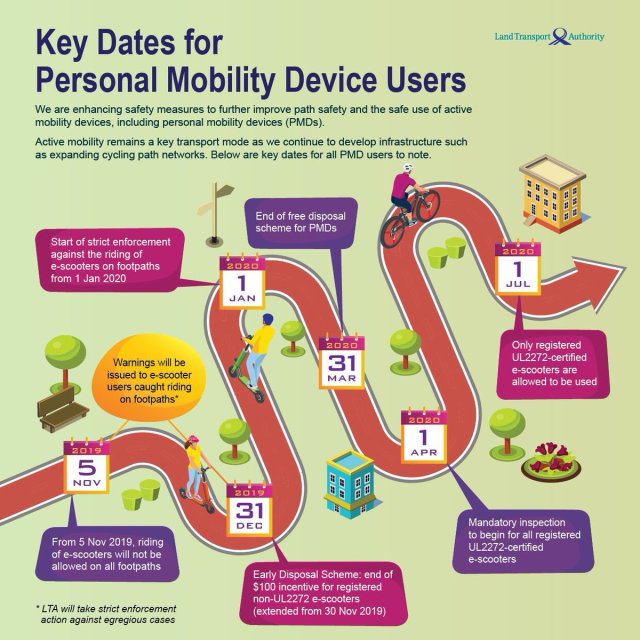 Straits Times: E-scooters to be banned from Singapore footpaths from Nov 5

As the below chart shows, this isn’t just eScooters. eBikes are also banned from footpaths: 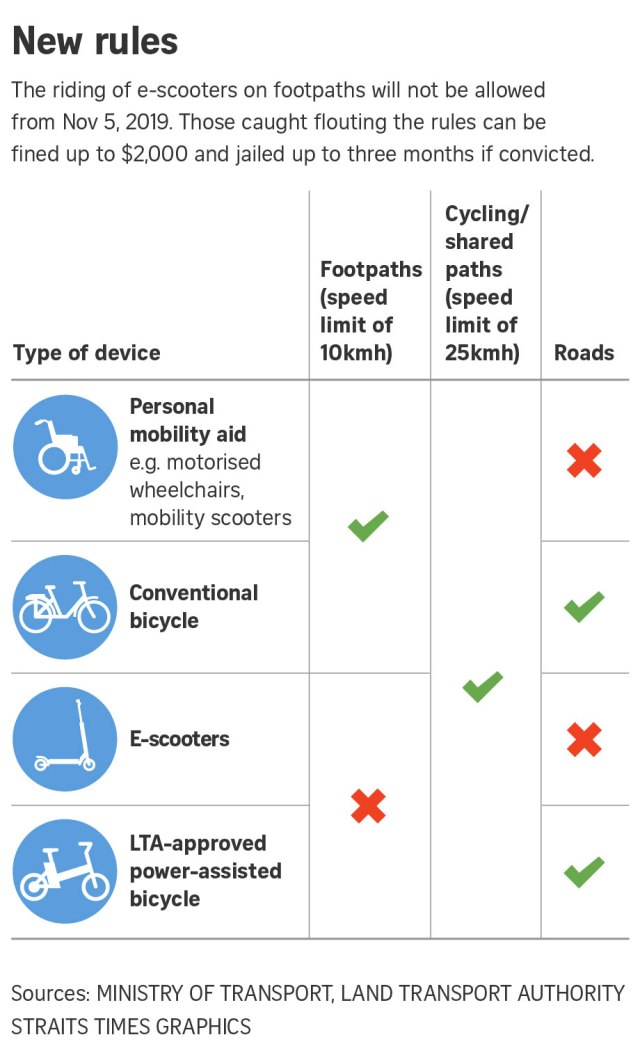 Another cascade effect is that delivery people who use eScooters can no longer use them for their employment. Their employers must provide a pedal bike or — ironic — return to gas-powered motorcycle or cars/vans for deliveries. There just isn’t enough now-legal roadways for delivery people to cover their routes. The previous 5,500km of footpaths is now limited to 440km of cycleways.

Here’s Jamie Lim in Singapore. He’s been my ongoing guide on YouTube about Singapore and PMDs:

PMDs and Escooters Will Be Officially Banned On 5th November 2019!

Of course, PMD riders disagree and have started a petition: Allow PMD on Footpaths or Roads. At post time, it was looking for 2,500 signatures. I watched as it added a new signature per second, finally pausing at 2,464. Then it surpassed 2,500 — and a new 5,000-signature goal was created.

All of this is not good. Singapore was the first nation to see the value in Alt-Wheels and codified their use into law. They provided an overall model for other countries to adapt. Now they’re retreating from their original vision. If Singapore can’t control riders, will other nations think they can? Singapore wants all PMDs registered. Will the next step be mandatory classes and licensing?

And with Singapore footpath speeds restricted to 10kmh (6mph), will Alt-Wheels makers need to add a Footpath Mode to their firmware, so riders can be assured they aren’t going past that limit?

There’s one other alternative: With Singapore’s goal of being a car-lite nation, will they finally admit their mistake and carve out space for Alt-Wheels on their streets, as other nations have done? This seems to be the most sensible choice.

Inability to admit mistake for lack of regulations for PMDs